We have grown up with the idea that men, being pragmatic and realistic, run the household effectively and women are to look after the kids and the household chores. Just to give it a name, this is a traditional men-led relationship.

How to Train Your Man? – 7 Victoria Secrets

But now people tend to conceptualize such a relationship successful in which both the partners have an equal footing and nobody leads. Conversely, men and women who seek out an unconventional female-led relationship (FLR), there is no such thing as equality in it. Rather it’s the female who heads the household.

Here, in this article, we’ll enlighten you with an unorthodox way to embark upon a relationship with the man that will introduce you to a whole new way of captivating your love life. Yes, you’re guessing it right, it’s the female-led relationship we are to talk about in quite a detail.

What Is A Female Led Relationship?

A female-led relationship (FLR) is simply the one whereby a female takes the charge and calls the shots for the well-being of the relationship. This breaks the stereotypical notion that men should always lead and dominate.

A female-led relationship is a traditional relationship but with the gender roles reversed. This implies that the woman steps out and takes over financial responsibilities and the man stays at home for cooking, cleaning, looking after the kids, and managing household tasks.

A woman being in authority makes the primary decisions to keep the family or the relationship going.

Relationships which are led by women are often misunderstood as to people it’s quite a disproportionate sort of association if both the woman and the man decide to turn over responsibilities of each other.

Because the society we live in is inclined towards stereotypes and people believe that a relationship is more cogent and lucid if driven by a man.

We are fed with this thought since our early ages that women are merely supposed to give their best within the confines of the four walls. Ugh, that’s such a cliche. Just get out of this thinking. It’s no more applicable in this modern era.

The earlier you understand this fact, the better it will be for you to propel your relationship.

Nowadays, women are excelling in almost every field. Have in mind, they are second to none. The stigma that encapsulates our gender roles is eroding over time. FLR can be a wonderful experience for both the partners if they both do not overstep their boundaries.

It is imperative to have proper communication and trust in this power exchange relationship if you want to satisfy your burning desires beyond your wildest and craziest dreams.

Subduing your manly control and devoting your every inch to cater to her needs, will scratch the surface for a happy going female-controlled relationship.

Having the submissive at service, the dominant gal loves to train him as to how to achieve maximum satisfaction.

You need to understand that a female-led relationship doesn’t merely center its focus on sex. It’s all about simply achieving success and pleasure in every aspect of life with role reversal.

Let’s have a look at this aspect of FLR.

Managing finances has long been the department of men. But a relationship in which your female takes the driver’s seat, she is the one to take all financial matters on her shoulders. She takes care of all the expenses including rent, groceries, and luxuries. It is noteworthy that in driving a happy relationship, budgeting, saving, and making dead-lock decisions, all carry considerable weight.

If you are good at handling this domain, you can easily end money centered arguments that take a toll on the overall balance of the relationship. Thus, financial responsibility goes a long way to changing your vanilla lifestyle into the kinky one.

If you are pursuing a female led relationship, it’s good for you to know at what level you are in your relationship.

FLR (Female-Led Relationship) can be categorized into four different levels based on the intensity with which a female controls the relationship. It’s likely that a couple after mutual understanding jumps from one level to the other but both the partners will only adjust or find their comfort in any one or two levels.

Let’s have a brief overview of these levels.

As the name suggests there is lower female control at this level and it is the most relaxed one. When a man and a woman are pursuing a relationship at this level, the decisions are taken mutually for the mutual benefit. The woman only leads in a few cases when a man is committing to be led.

It’s a level a bit more in intensity than the lower one. Here, the woman seeks pleasure in heading her man but moderately. Also, the man enjoys it when he finds his lady ruling over him.

Men who want more dominancy from the female in a relationship are not satisfied with this level. Probably, they would fit in level 3 or 4 depending on their needs and desires.

It is more of a formal dominant and submissive relationship. The woman loves to control whereas the man feels overwhelmed by submitting himself to her physically, emotionally, and sexually. Here, the traditional gender roles are flipped- a woman handles finances whereas a man takes over household responsibilities.

This level is all about extreme pleasure and pain for both the partners.

Why does a man seek out a Female Led Relationship?

A lot of reasons can be listed to answer as to why men want the female to take the reins.

1 – Most of the successful men who make quite a good living control a lot of people at their workplaces. After a long day, they want themselves to be controlled by someone and that someone is surely the woman they have in their lives to get the pleasing effect out.

2 – Some men have natural tendencies to devote their obedience to the female in authority. For such a category of men, it’s appealing to be in a female-controlled relationship.

3 – A good number of men find it hard to make decisions that are fundamental to the overall health of the relationship. Not considering themselves capable of driving, they give in to their female partner.

4 – Some men just like women who are in power. They enjoy kneeling over to every kink of their ladylove. Therefore, they prefer to be in a relationship that is purely ridden by a woman.

Men who have inherent submissive tendencies and women who wish to enchant their love life by taking the lead, its ideal for both of you to try a female-led relationship.

If you wish to pursue a Female Led Relationship but are wondering how to establish such a relationship, you need not worry. We are here to make your wish come true by giving you some guidelines on how to develop an effective and loving female-led relationship.

1. Set boundaries for your male partner:

2. Show up as a female authoritative figure:

It all depends on the nature and personality of the female. If she is a dominant, alpha female, then she will be leading the relationship naturally. However, if you are just practicing the idea of a female-led relationship, then your girl can ACT like a dominant female for a week or a month.

3. Work on brushing his bad habits away:

4. Give the charge of all the domestic roles to your man:

It’s all about reversing the roles. You have to trust the feminine instincts of your man to let him handle all the domestic chores and the well-being of the kids as well.

5. Be the dominant female in the bedroom:

Sex is usually a place of male domination for ages. But in the case of the female-led relationship, woman dominates the sex part of the relationship as well.

6. Take over the household finances being in charge

As a female, you are the bread earner of the house in a female-led relationship. Take over the finances and manage it as you will.

7. Ensure obedience and discipline in your relationship

Now, this one is a bit tricky. Do observe the principles of respect and dignity in a relationship as well as your authority. You need to make sure that you are leading a balanced relationship.

These Female Led Relationship Quotes are not directly upon the subject. But these quotes are related to the topic of FLR. Therefore, we are happy to share these quotes with you.

Below shared Female Led Relationship Quotes will develop confidence in you as a female. As a male, these will develop trust in females which will allow you to enjoy the female-led relationship in your life.

Which one is your favorite FLR quote? Let us know in the comments section below. 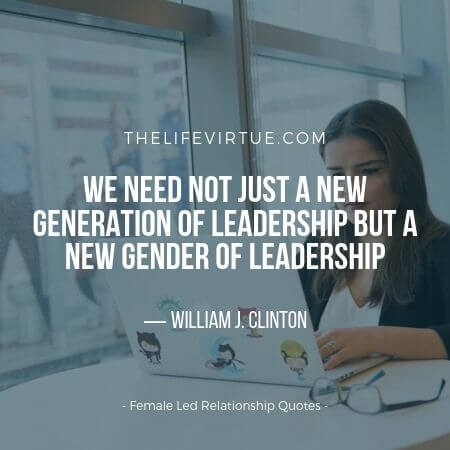 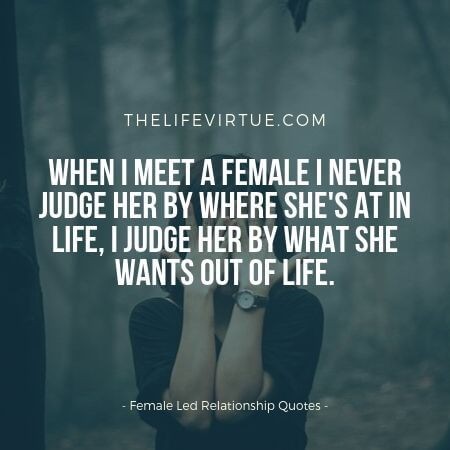 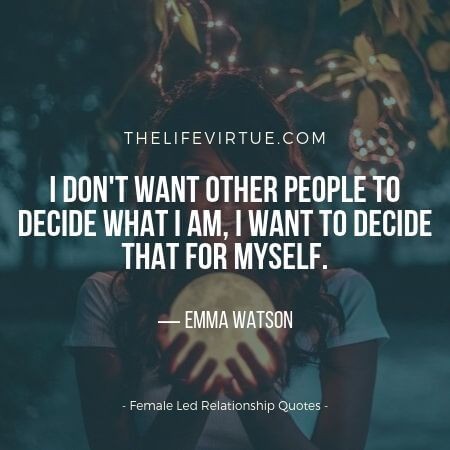 What does a female-led relationship mean?

Female-led relationships are the ones in which females typically lead the way, commence, and then make the decisions. These female-led relations work nicely with a strong woman and a guy who does not mind being all along for the ride.

What is the FLR relationship?

FLR stands for Female Led Relationship. It is simply the one in which a lady takes charge of the relationship and makes the decisions for the wellbeing of the rapport. This ends the conventional belief that males should always be in the lead and dominate. An FLR (female-led relationship) is a conventional rapport but with gender-reversed roles.

What is it like to be in a female-led relationship?

A female-led relationship (FLR) is the traditional rapport but with the gender-reversed roles. This means that the female comes out and gets over financial duties and the guy stays at home for house chores like cooking, cleaning, looking after the kids, and managing chores.

What does FLR mean in dating?

While there is no official definition for FLR (female-led relationship), the Female Led Relationship means there might be the female as the mandate and smash the old-fashioned idea that the man must always be responsible for.

To sum up, when a woman leads, she maintains the momentum of the relationship. This is a hard job but it becomes less of a burden if you have the right person in your life to be in a relationship with.  Always remember, when the interests of two people are in sync, no matter who’s in charge, the likelihood of happiness, satisfaction, and enjoyment in a relationship will be infinite. Just be honest and effectively communicate with each other. Working on what makes you and your significant other happy and radiant will surely make a way for success and prosperity to diffuse into your relationship.