The central hypothesis of this theory suggests that aggression causes the frustration and blockage of a person’s’ effort to attain a goal.

Nowadays, anger management is a serious issue, and a lot of discourse is developed upon it.

It is fascinating to educate oneself about the repercussions of anger and how our achievements are dependent upon one of our strongest emotions i.e., aggression. Let us explore what Frustration-aggression theory implies by discussing its main postulates and understanding how it is relevant to our modern-day dynamics. 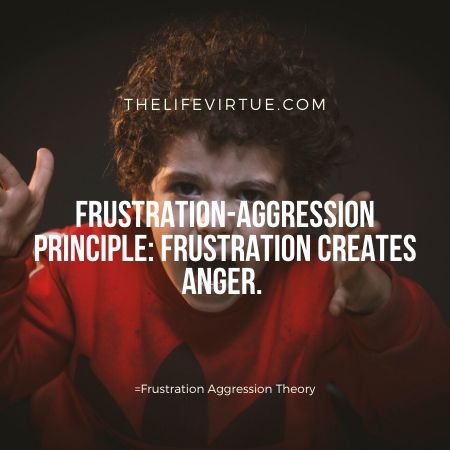 This theory explains that what are the possible reasons for scapegoating and causes of violence. It suggests that aggression is displaced to an innocent target when the source of frustration is unchallengeable.

For example, a man who is humiliated by his boss at work would yell at his family because he cannot respond to the source of his frustration i.e., his boss, so it is directed towards an innocent target, for example, his children. It also suggests that deprived sections of society cause revolutions and riots as a way of expressing their bottled up frustrations through violent behavior. 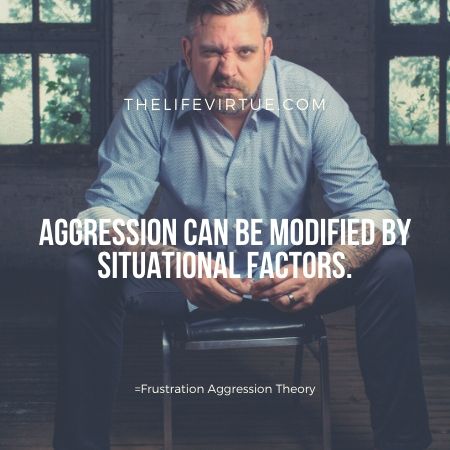 This theory not only pertains to psychology but also anthropology, sociology, Marxism, and behaviorism. It is not only applicable to human beings but also animals.

4. It has a cultural angle

According to Gregory Bateson, culture has a major significance in this hypothesis. He suggested that it is easier to fit this hypothesis to people who live in cultures that portray neutral or frustrating events leading to satisfying ends. It is especially relevant for European and Iatmul culture but not for Balinese culture.

5. Social norms are an important indicator

According to Arthur R. Cohen, social models are determinant whether aggression will be preceding frustration or not. His research indicated that people are less likely to profess aggression if their surrounding social standards are stressed.

Aggressive behavior is also dependent upon anticipation of punishment. He also suggested that people will not demonstrate aggression to the frustration agent if it is an authoritative figure. 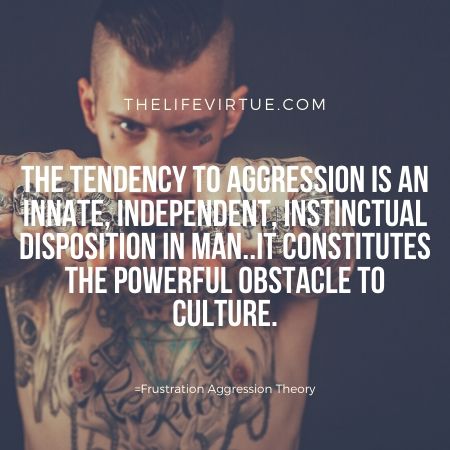 In 1964, Leonard Berkowitz reformulated the hypothesis by suggesting that aggression stimulus is necessary to make aggression take place. He implied that the extremely angry subject would profess aggression even if the aggression cue is absent.

It stated that prior exposure to any violent object or event such as military weapon toys that are associated with destructive effects would act as aggressive cues for young children that will increase the chances of aggressive behavior. Aggression is originated from internal and external stimuli. 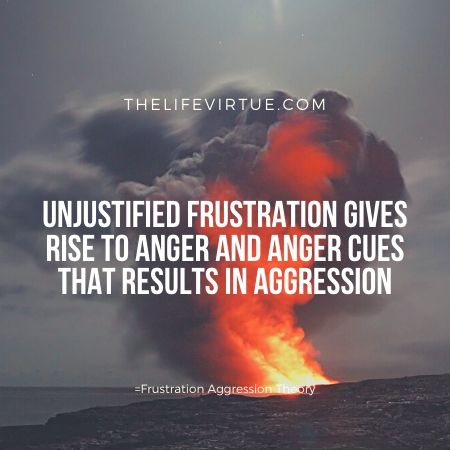 7. The neural system is responsible for aggression

Apart from frustration, threatening events also generate feelings of aggression. The neural network is responsible for the execution of primary responses to threats, such as anger. When someone feels threatened or frustrated, it activates parts of our frontal cortex acting in tandem without a threat-response mechanism.

Threatening events generate more action potentials. For example, in animals, when low levels of danger are perceived, threat response induces a freezing reaction. When the source of threat is closer and escaping is not possible, then the threat response system will cause reactive aggression in the animal.

Physical maltreatment of children can result in reactive aggression. Shackman and Pollak tested individual differences in the processing of social information. Children who are physically maltreated are more aggressive as compared to children who were not maltreated. 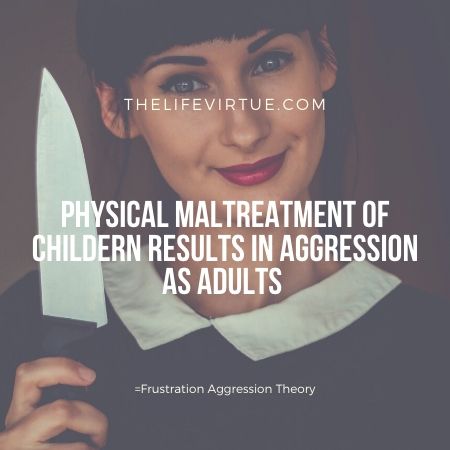 9. Frustration not always leads to overt aggression

If punishment is anticipating, outweighing all the potential incentives, then overt aggression would be inhibited. However, all frustrations result in some aggression, which implies that a lack of overt aggression should not be confused with non-aggression.

Being furious from inside and not professing it outside is an example of non-overt aggression.

10. A violent assault on frustration is cathartic

If there is a violent assault on the source of frustration, then it is cathartic for the frustrated person. Expression of minor and subtle acts of aggression acts as an alternative and powerful way of bringing catharsis than overt aggression. Expression of annoyance is also cathartic even if it doesn’t involve physical harm.

The speculation became severely criticized on the grounds of theoretical stress and overgeneralization, restricting the scope of the speculation to establish its validity.

For instance, the initial hypothesis failed to differentiate different forms of aggression, wherein the actor’s goal is to inflict damage and instrumental styles of aggression, in which aggression is clearly mean to acquire other goals (which includes manipulation or domination). This grievance can be dealt with as an alternative of confining the frustration-aggression speculation to instances of hostile aggression alone.

Critics additionally challenged the premise that any interference with ongoing aim-directed behavior would evoke frustration. According to the American psychologist Abraham Maslow and others, valid (or justified), interventions do not necessarily produce frustration. Only styles of interference that appear illegitimate (or arbitrary or in any other case unjustified), they argued, should result in frustration.

Research indicated that aggressive behavior is undoubtedly a regularly occurring reaction to what are viewed as planned and unfair efforts to intrude with a man or woman’s goal-attainment opportunities.

How is Frustration-Aggression Theory is Relevant Today?

Mass media often portrays a different and often stereotypical image of minorities. The mainstream narrative seems to revolve around the aggressive and rioting tendencies of minorities. Black people are often associated with violent behavior and activities.

However, apart from its stereotypical agenda-setting, this particular instance makes one thing clear, and that is the association of aggression with minorities. The struggle of the working class can build frustrations up to the level of inciting revolution.

Instigation of aggression grows with every frustration in disadvantaged minorities, which ultimately leads to violence. These frustrations can have long-lasting effects. Another such example can be quoted through the studies of Plack in 1969. He suggested that all evils of society, especially violence, is resulted from an abundance of denial in childhood and teenage years. 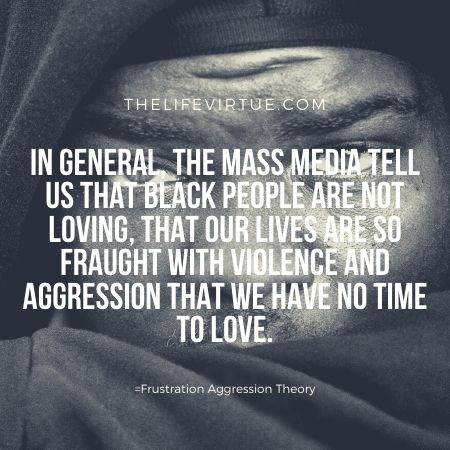 Frustration-aggression theory is very relevant, especially in this context. If we carefully analyze, it is easy to observe that the violence witnessed in minorities is often resulting from the oppression they face due to the status quo. This also pertains to the concept of anarchy.

When the minority group is unable to fight with their superiors, they profess violence within their community.

Ever heard of numerous stories revolving around mass media that suggest domestic violence is more prevalent in working-class and low-income households? It is because family is often an “innocent” target that becomes an outlet of channeling out frustrations through means of aggression.

How Aggressive Behavior is Harmful?

Aggression has many disadvantages; some of the major ones are as below:

How to Control Your Aggression?

Here are some useful tips for dealing with aggression. They might help you to cope up with it. 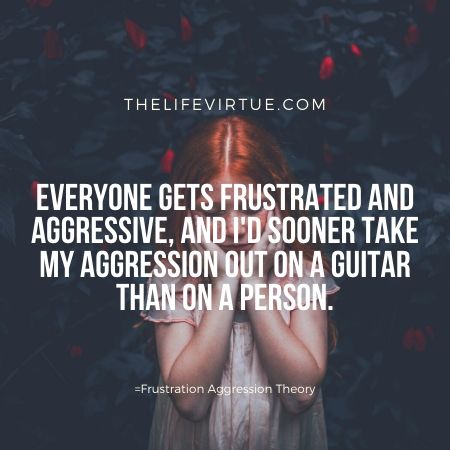 What is frustration and aggression theory?

This theory proposed by Dollard, Doob, Miller, Mower, and Sears in 1939. This theory states that frustration often leads to aggressive behavior.

Does frustration always lead to aggression?

Not always, but whenever we are frustrated and trying to hide our feelings due to the fear of social consequences or we might know that we are wrong that’s why we become aggressive.

What is the difference between frustration and aggression?

Well, frustration is a condition that exists when a goal-response suffers interference. While aggression is an act whose goal-response is an injury to an organism. ~ Dollard and colleagues.

Is aggression inborn or it is a response to frustration?

Well, few theories reveal that it is not an inborn behavior but a response to frustration that every human being experienced almost from birth.

Frustration-aggression theory suggests the mechanisms of how aggression is always rooted out of frustration. The way of professing anger can differ based on context. It can be overt and covert as well.

Alternative methods of expressing aggression can prove to be cathartic. Frustration-aggression theory is very relevant in our modern society, especially when it comes to mass media representation of minorities. There are some practical ways of controlling aggression, as mentioned above.

These tips are can somehow help you to reduce your anger if not curbing it down. We understand that aggression has much deeper roots and treatment than some simple ways.