Before sharing Malala Yousafzai Quotes & Sayings in this post, let us make clear that despite being a symbol of bravery & child education, Malala is a controversial figure as well.

So while you are reading these Malala Yousafzai Quotes, keep in mind that whether you like her or not, you can agree with the things she has to say.

So, without any delay in sharing, let us start the Ultimate Collection of Quotes & Sayings of Malala Yousafzai.

Education & Bravery are the two symbols of Malala Yousafzai. This is the section where we will be sharing her quotes & sayings on these themes. Let us reflect upon the meanings of these quotes and inculcate them in our day-to-day actions as well.

1. “Let us pick up our books and our pens, they are the most powerful weapons.” – Malala Yousafzai Quotes on Education 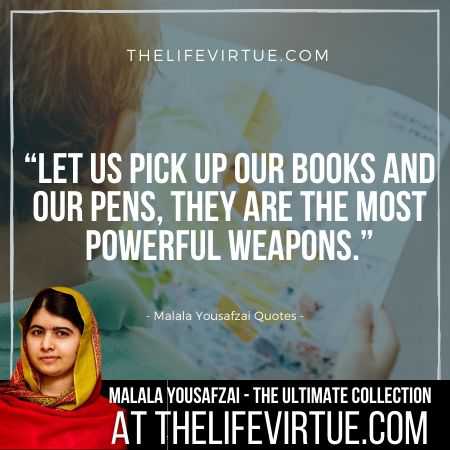 2. “When someone takes away your pens you realize quite how important education is.” – Malala Yousafzai Quotes on Education

4. “Extremists have shown what frightens them most: a girl with a book.” – Malala Yousafzai Quotes on Education

5. “Honor your daughters. They are honorable.” – Malala Yousafzai Quotes on Daughters

6. “I am not telling men to step away from speaking for women’s rights; rather, I am focusing on women to be independent to fight for themselves.” – Malala Yousafzai Quotes on Education 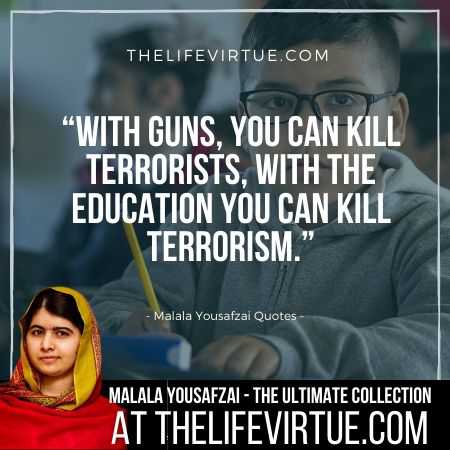 8. “I don’t want to be thought of as the ‘girl who was shot by the Taliban’ but the ‘girl who fought for education.’ This is the cause to which I want to devote my life.”

9. I enjoy science, and I’m a very curious person. I always want to know the reason behind everything, big or small. Malala Yousafzai

10. “If one man can destroy everything, why can’t one girl change it?” 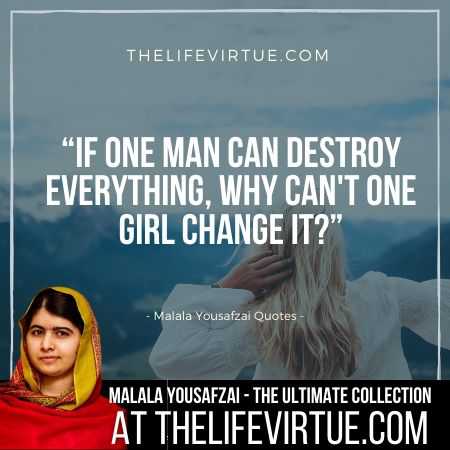 11. “No struggle can ever succeed without women participating side by side with men. There are two powers in the world; one is the sword and the other is the pen. There is a third power stronger than both, that of women.” 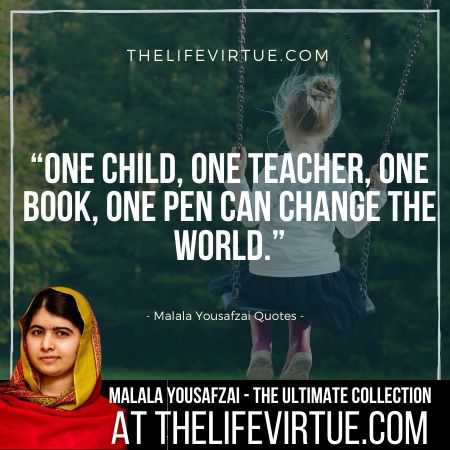 15. “Once I had asked God for one or two extra inches in height, but instead he made me as tall as the sky, so high that I could not measure myself.”

16. “When the whole world is silent, even one voice becomes powerful.”

17. In India, innocent and poor children are victims of child labor. 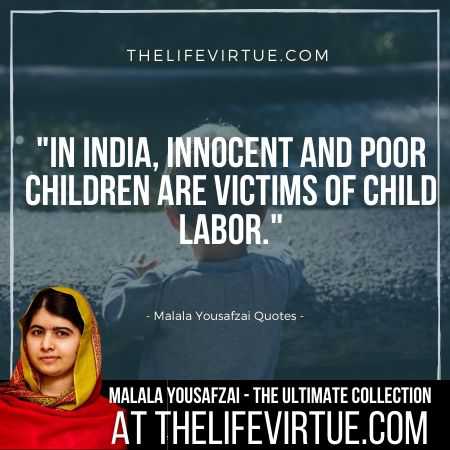 18. “If people were silent nothing would change.” – Malala Yousafzai Sayings & Quotes

19. “Some people only ask others to do something. I believe that, why should I wait for someone else? Why don’t I take a step and move forward.” – Malala Yousafzai Sayings & Quotes

20. “We were scared, but our fear was not as strong as our courage.” – Malala Yousafzai Quotes on Bravery

21. “You should believe in your talent and potential.” – Malala Yousafzai Quotes on Bravery

22. “We realize the importance of our voices only when we are silenced.” – Malala Yousafzai Quotes on Bravery 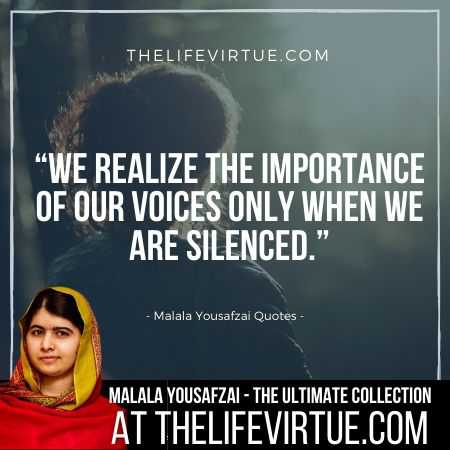 23. “We human beings don’t realize how great God is. He has given us an extraordinary brain and a sensitive loving heart. He has blessed us with two lips to talk and express our feelings, two eyes which see a world of colors and beauty, two feet which walk on the road of life, two hands to work for us, and two ears to hear the words of love. As I found with my ear, no one knows how much power they have in each and every organ until they lose one.” – Malala Yousafzai Sayings & Quotes

24. “We are stronger than those who oppress us.” – Malala Yousafzai Sayings & Quotes

25. “I raise up my voice not so I can shout but so that those without a voice can be heard…we cannot succeed when half of us are held back.” – Malala Yousafzai Sayings & Quotes 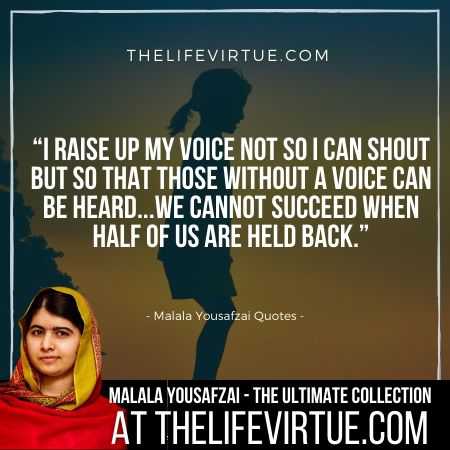 26. “They thought that the bullets would silence us, but they failed. And out of that silence came thousands of voices.” – Malala Yousafzai Sayings & Quotes

27. “I don’t want revenge on the Taliban, I want education for sons and daughters of the Taliban.” – Malala Yousafzai Sayings & Quotes

29. “I think everyone makes a mistake at least once in their life. The important thing is what you learn from it.” – Malala Yousafzai Sayings & Quotes

31. “Books can capture injustices in a way that stays with you and makes you want to do something about them. That’s why they are so powerful.” – Malala Yousafzai Quotes on Life 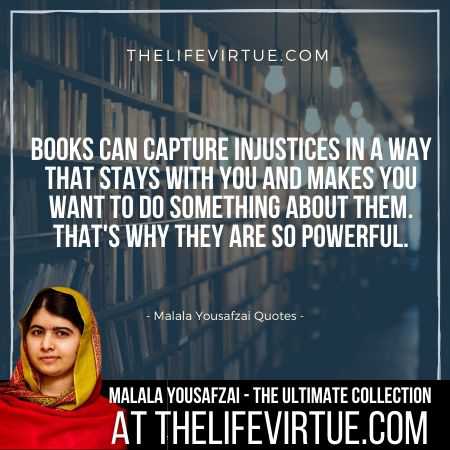 32. “We liked to be known as the clever girls. When we decorated our hands with henna for holidays and weddings, we drew calculus and chemical formulae instead of flowers and butterflies.” – Malala Yousafzai Quotes on Life

33. “I told myself, Malala, you have already faced death. This is your second life. Don’t be afraid — if you are afraid, you can’t move forward.” – Malala Yousafzai Quotes on Life

34. “Ignorance allowed politicians to fool people and bad administrators to be re-elected.”

35. “Do not wait for someone else to come and speak for you. It’s you who can change the world.” 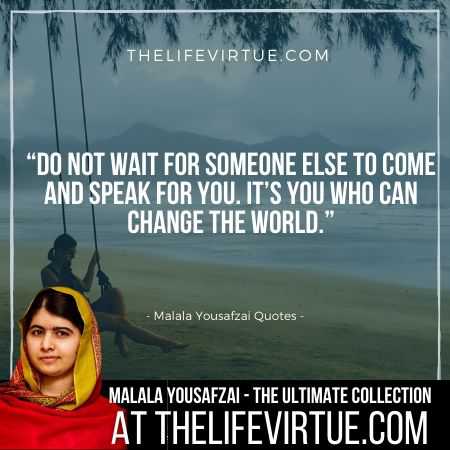 36. I think life is always dangerous. Some people get afraid of it. Some people don’t go forward. But some people, if they want to achieve their goal, they have to go. They have to move…

37. “Our men think earning money and ordering around others is where power lies. They don’t think power is in the hands of the woman who takes care of everyone all day long and gives birth to their children.”

38. “To me, the moral of the story was that there will always be hurdles in life, but if you want to achieve a goal, you must continue.” 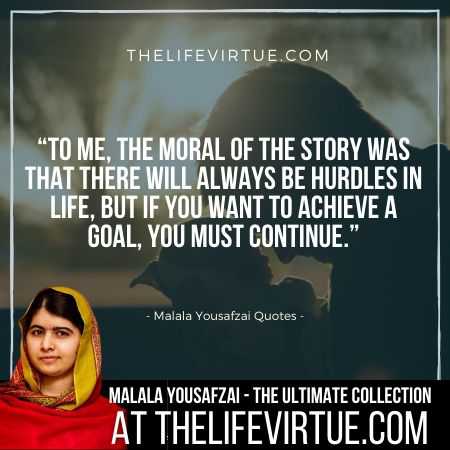 Malala was a school going girl when she was allegedly shot in her head, therefore, she has become the symbol of the fight for Education, particularly the Education of Girls.

In this section, we reflect upon the quotes of Malala Yousafzai from her various speeches on Girls, Schools & Weapons.

40. “I will read thousands of books and I will power myself with knowledge. Pens and books are the weapons that defeat terrorism.”

41. Some girls cannot go to school because of the child labor and child trafficking. Malala Yousafzai 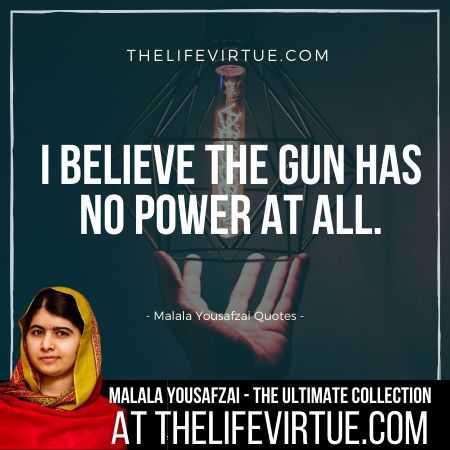 43. It gets quite difficult for me when I listen to pop music. I don’t often understand the words, but when someone translates them to me, I think, ‘What is this song representing? That women are just there to be treated as objects?’

46. If you don’t focus on the future generation, it means you are destroying your country. 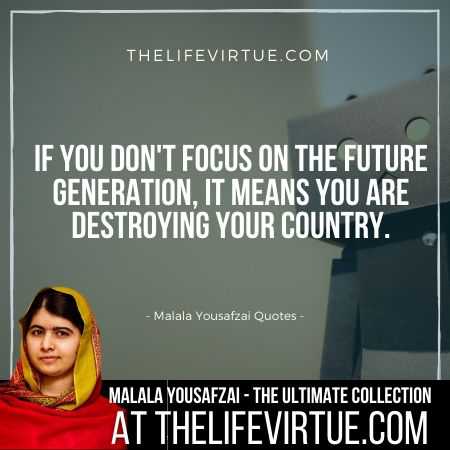 47. Outside of my home, I look like a very obedient, very serious, very good kind of girl, but nobody knows what happens inside the house.

48. If you kill someone, it shows that you are afraid of that person. 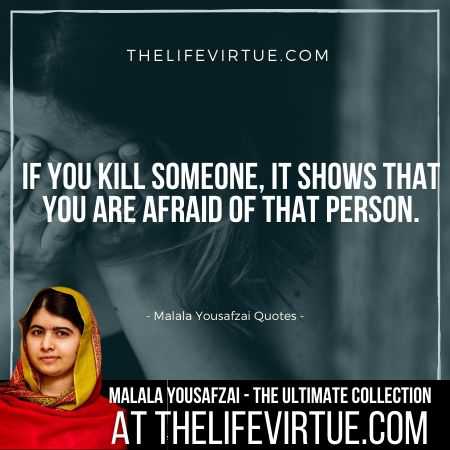 49. “The best way to solve problems and to fight against war is through dialogue.”

50. I like writers who can show me worlds I know nothing about, but my favorites are those who create characters or worlds which feel realistic and familiar to me, or who can make me feel inspired.

51. There are many problems, but I think there is a solution to all these problems; it’s just one, and it’s education. 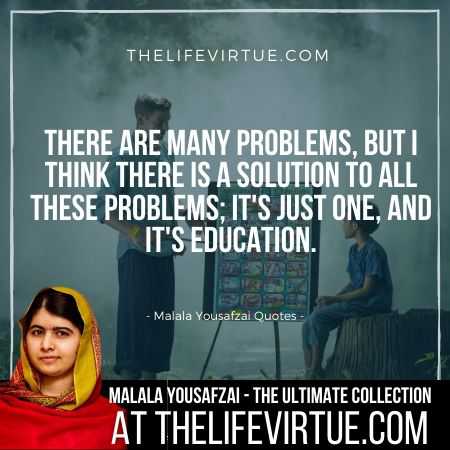 53. What is interesting is the power and impact of social media… So we must try to use social media in a good way. Malala Yousafzai 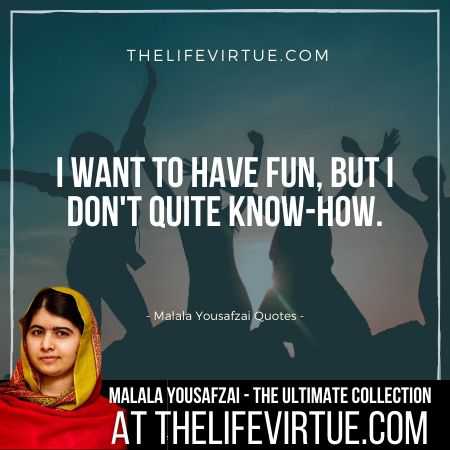 55. When I was born, some of our relatives came to our house and told my mother, ‘Don’t worry, next time you will have a son.’ Malala Yousafzai

56. Dear sisters and brothers, we realize the importance of light when we see darkness. Malala Yousafzai

57. There should be no discrimination against languages people speak, skin color, or religion. Malala Yousafzai 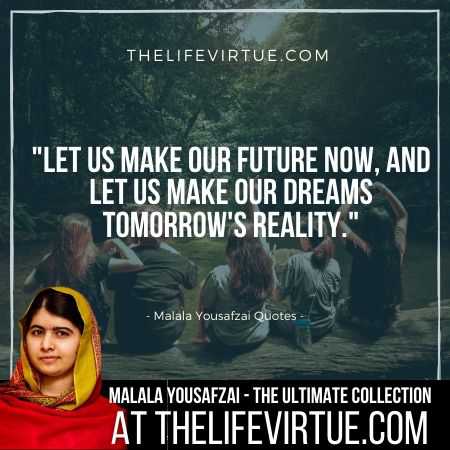 What does Malala think about the other great icons and symbols of freedom, women empowerment & humanity? In this section, we have included the sayings of Malala Yousafzai about two famous personalities, one from the other side of the world while the second from her own country. 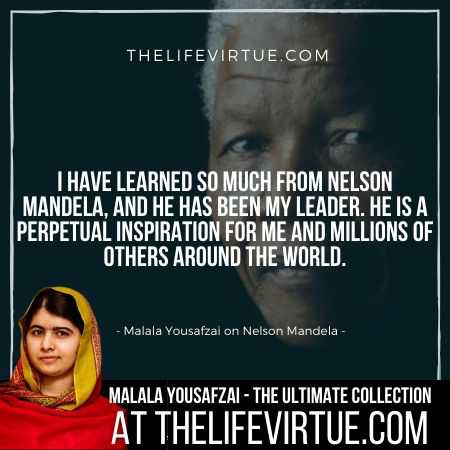 59. Nelson Mandela is physically separated from us, but his soul and spirit will never die. He belongs to the whole world because he is an icon of equality, freedom, and love, the values we need all the time everywhere. I have learned so much from Nelson Mandela, and he has been my leader. He is a perpetual inspiration for me and millions of others around the world. 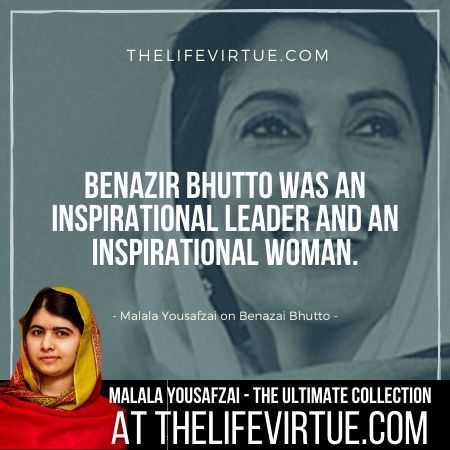 This is one of the unique & amazing additions to our collection of Malala Yousafzai Quotes & Sayings.

61. “Your words and deeds have served to advance humanity,”- S. Allen Counter 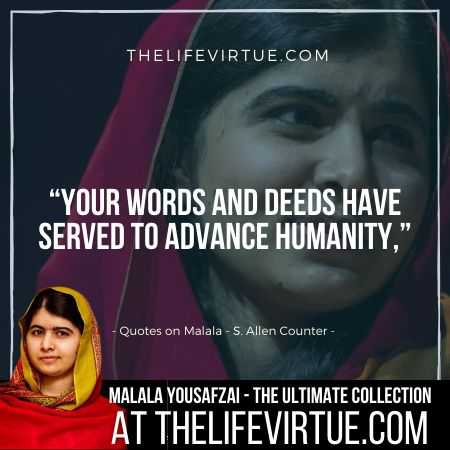 62. “Malala, we stand here today in awe of you, Let us reflect on the power of one woman’s voice to move many.”- Paula Johnson 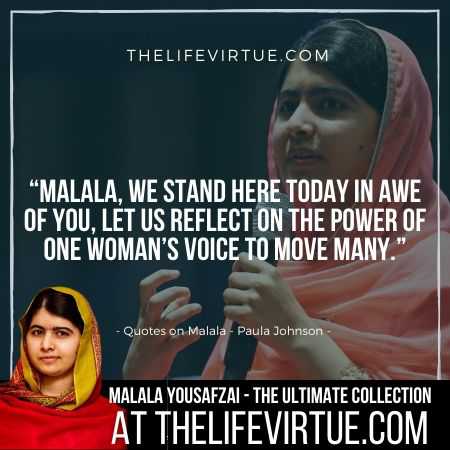 Why was Malala shot?

On 9 October 2012, while on transport in the Swat District, subsequent to taking a test, Yousafzai and two different young ladies were fired by a Taliban shooter in a death endeavor in reprisal for her activism; the shooter fled the scene.

Who is Malala Yousafzai and why is she famous?

Malala Yousufzai is a campaigner for young ladies’ instruction from Pakistan. She was shot by the Taliban in 2012, when she was only 14 years of age however, proceeded with her work and turned into the most youthful individual ever to win the world-well-known Nobel Peace Prize.

How did Malala Yousafzai change the world?

Her story stood out as truly newsworthy in 2012 when, at only 15 years of age, she was shot in the head by the Taliban for upholding young ladies’ instruction. Enduring the assault, she proceeds with her endeavors to guarantee young ladies around the globe approach quality instruction.

What is Malala Yousafzai doing now?

She has proceeded with her promotion for young ladies’ entrance to instruction in the wake of beginning another life in Birmingham with her family. She won a spot at Oxford University’s Lady Margaret Hall to understand the reasoning, governmental issues, and financial aspects.