Do you wonder why guys get jealous when you talk to your friends? In this article we will make it clear why some guys do this, and what you should do about it.

Some may call it jealousy, some may call it overprotective. There are many reasons why a guy would get jealous when his girlfriend talks to other men.

Let’s look further into why these guys get jealous when you simply talk to other guy friends.

Why Do Guys Get Jealous When You Talk To Other Guys

Are you a girl who has a couple of guy friends and your boyfriend gets mad or jealous when you talk to them? If so, you are at the right place, we will explain everything that goes through your boyfriend’s head in such situations.

Why Do Guys Get Jealous?

There are basically two different buckets that guys fall into when they get jealous when their girlfriend talks to male friends. The overprotective and the jealous.

In both cases, the guys behavior gets weird when their girlfriends talk to other guys. Such behavior leads to unwanted fighting in the relationship. Now the situation differs for everyone, but understanding your man and his true intentions when he gets mad at you for talking to other guys is an important point.

If a guy is acting very sweet and friendly, girls usually fall for it. They think that the guy is very kind and down to earth and he is just enjoying his time talking to her and is a great friend.

But that is not always this is their intention. These “friends” may be simply trying to attract the girl’s attention and guide her to break her relation with their current boyfriend by speaking negatively of the boyfriend

The boyfriend may see this (or think he sees it) and simply be trying to show this to the girl. While there may be truth in this, this is also what a jealous boyfriend may feel. even if it is not true.

One way to tell if there may be some truth in his being overprotective is to ask yourself if his reaction is toward all guys, or just one. If the guy seems to think all guys are trying to befriend you to break you up and take his place, he is likely just jealous. If there is one specific guy he doesn’t trust, maybe you can keep an extra eye out to see if there is some truth in his complaints.

If your guy is just jealous, though, this can only be viewed negatively. When you guy gets jealous when you talk to other guys, either the boy doesn’t trust you or is not loyal to you himself.

The jealousy entirely comes when the guy doesn’t trust his girlfriend and thinks she might cheat on him. Or he thinks he is incompetent enough in front of her friends which may lead her to cheat on him.

When there is love there must be trust. And trust must be two ways. Both parties in a good relationship must have trust in each other and know what the other can do and what not.

What Does A Guy Being Jealous Reflect

Guys’ jealousy in such matters is not a positive sign. It shows how little he trusts in you. It also shows why he is acting so differently. here are a couple of reasons and causes why do guys get jealous while you are speaking to your male friends.

One reason could be that he is insecure about his looks or personality and feels that your male friends are better than him. To which he may overthink that you may end up leaving him for them.

He Doesn’t Trust You

This should be a BIG red flag. If people are not willing to give some trust it is often because they themselves are not trustworthy.

If he gets jealous and mad and wants you nowhere near any other males. He doesn’t have faith in you that you truly love him and you won’t leave him.

This Could End Up Physical

If he asks you to stop talking to other guys and you say you won’t do it, some guys may get more forceful. This may be by raising his voice at you, giving you ultimatums or in extreme ways such as physical abuse.

This cannot be tolerated.

If a guy is a little bit insecure, that can be forgiven. But when they give no thought to your feeling and opinions, don’t trust you to make the right decision if the other guy is trying to find a way to date you, and even thinks about getting physical, it is time to end the relationship. It can only go bad,

It could be that your boyfriend feels temporary. He might feel you are just with him until you, “find someone better”, and this is why he doesn’t want you talking to other guys, because he feels you might be more interested in the other guy than him. Hence he tries limiting you from having male friends in order to prevent you from finding someone better than him, in his mind.

In this case it is both a lack of trust and a lack of self-esteem. 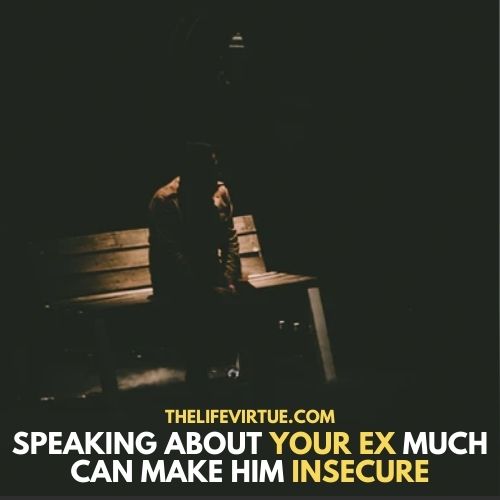 If this is the case, your best bet is to explain to him you only care about him, your male friend has no intentions toward you, but even if he did you would still want to stay with him.

Be understanding, but if he persists, even after you take the time to reassure him, this is another big red flag you should watch out for.

He Is Looking Out For You

In some cases when he asks you to not be friends with specific friends, you should listen to him. It’s not all males but some specific guys, he might see or know things that you don’t.

There is a chance the guy does have your best interests at heart. So if he finds something off about one of your specific male friends, you may want to listen to him. He is doing this to maintain your relationship and so nothing disturbs the trust.

He Is Finding A Way To End Your Relationship

If he is of those stereotypes who go out flirting with other women and hang out in clubs and bars while being in a relationship, it is a clear sign he is not loyal and anything new that attracts him, he may leave you.

So for him, you are temporary; if he is not enjoying the relationship and is just frustrated he may be in the mood to end it. He is just finding a reason to end it. He will end up blaming you, that you flirt with your male friends which will later lead to the blame game and eventually call it off.

He Is Just Lonely

If your man is not a very outgoing person, doesn’t understand well how social relations are. He just feels lonely if you leave for hangouts with your friends, since he only has you in his life. You should understand that he doesn’t really understand how your relationship is with a male friend, so listen to him most of the time; limit your hangouts to once or twice a month.

Involve your boyfriend in, whether in conversations or chats, get them to know each other so they also end up being friends. Like this, he may also enjoy going out with your friends.

Maybe he has never discussed anything like this but he was once cheated on? maybe he has some past memories attached that relate to his girlfriend having fun with her male friends. Try opening him up, tell him how much you trust him and how much he can trust you. Ask him to let all his feelings out, and then decide what is the best thing to do in a situation like this.

What Can You Do About a Jealous Boyfriend Who Gets Mad When You Talk to Another Male Friend?

If you guys have committed your life to each other, everything should be open. Unless this is a high school relationship where everything is just for fun. Try opening this discussion and asking him why he feels like this, and what must be done to improve the situation.

If you want to figure out why do guys get jealous, it is essential to communicate. Communication is key, talk it through. Let him know your thoughts and acknowledge his thoughts as well, cool him down, and find solutions together in order to keep both happy and satisfied and avoid fights. A guy is known to be very aggressive and the girl’s job in a relationship is to calm him down, talk it through and settle everything.

Apart from the communication, understand from your side and try avoiding or not meeting your male friends if it causes trouble in your relationship. So before questioning ” Why does he get jealous ” try checking yourself once if what you’re doing is all right.

Trending Articles on The Life Virtue:

17 Signs a Guy Wants a Relationship But Is Scared

19 Signs You are Just His Side Chick

15 Clear Signs a Guy has Never Had a Girlfriend

How to Tell if You’re in a Low Key Relationship: 11 Simple Steps